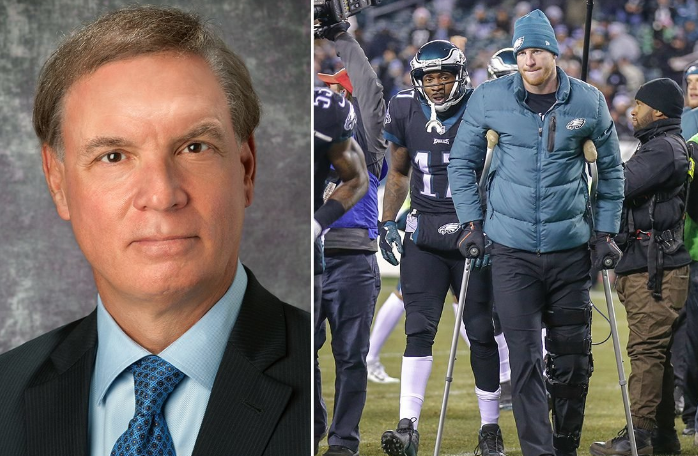 (Dr. James Bradley is a former President of the NFL Physicians Society and current Head Team Physician for the Pittsburgh Steelers.)

While details of Carson Wentz’s knee operation and its aftermath remain a mystery, shrouded by HIPAA restrictions as well as by the NFL’s obsession for secrecy, his surgeon’s identity makes it likely no cutting-edge technique has been ignored.

Dr. James Bradley, a former Penn State football co-captain who repaired the Eagles quarterback’s torn ACL earlier this month in Pittsburgh, has long been an advocate of innovative strategies when treating NFL stars.

“I believe to be an orthopedic physician there is a burden of craft to the patient that requires you to stay up to date on new medical advances,” he said recently.

Bradley has published articles about his use of various cellular therapies to supplement surgery or other conventional treatments. His arsenal includes platelet-rich plasma (PRP), made from the patient’s blood, and stem cells that are extracted from the patient’s bone marrow or fat. These biologic band-aids, which many believe speed the healing process, are then injected at the injury site.

Some of his success stories are well-known. In 2009, for example, when Pittsburgh wide receiver Hines Ward strained the medial collateral ligament in his knee two weeks before Super Bowl XLIII, Bradley, the Steelers’ physician since 1989, decided to try PRP, then a relatively new strategy.

The surgeon contacted a company that was producing the kits to process the blood, then administered three injections to Ward.

“Bradley was hailed as a genius,” ESPN magazine reported in 2011. “Weekend warriors everywhere started asking for the ‘Hines Ward treatment.’ ”

Wentz’s knee isn’t the first belonging to an NFL QB that Bradley has worked on. He did Ben Roethlisberger’s in 2016 and Charlie Batch’s in 2004, though neither operation was for a torn ACL.

“I wanted to get a second opinion from a surgeon in Atlanta,” Batch told the Pittsburgh Tribune in 2006. “He told me I had no reason to come down because I have the best guy in the NFL right here.”

Bradley, who has been named one of America’s top sports surgeons by several publications, has an impressive pedigree not only in medicine but in sports, as well.

The son of a Johnstown physician who played basketball at Pitt, Bradley, 64, was a defensive back and co-captain at Penn State in the early 1970s, one good enough to earn a tryout with the Cincinnati Bengals.

“Jim was an awesome guy, and an awesome doctor,” said Chris Devlin, a Penn State teammate who’s now a dentist in western Pennsylvania.

The Bradley family might soon need its own wing in the Cambria County Hall of Fame. Among the surgeon’s six siblings are Tom, Penn State’s longtime defensive coordinator who now holds that position at UCLA; Patty, a spectacular track star at Villanova who competed in the 1984 Olympics; and the late Matt, a Penn State linebacker who would later play for the Philadelphia Stars of the USFL.

“Matt was probably the best athlete,” then Penn State coach Joe Paterno said in 2009. “Jim was a guy, if they gave him a shot at it, he’d make a play. He was very aggressive.”

But according to Bradley, Patty was a better athlete than any of her three brothers. Bishop McCort High’s all-time leading basketball scorer, she went on to set 19 school records as a Villanova hurdler and middle-distance runner. After qualifying for the L.A. Olympics in the 400-meter hurdles, she missed making the final by one-tenth of a second.

Her oldest brother, meanwhile, headed to medical school at Georgetown after a short stay with the Bengals.

“The best thing that happened to me was that I went to the Bengals,” Bradley said in 2008. “I wasn’t good enough to play at that level. But when I went to medical school, I said I’d never take what I had for granted. I was obsessed. I was focused. It was a blessing in disguise.”

After residency, he practiced at one of the country’s leading sports-surgical centers, the Kerlan-Jobe Orthopaedic Clinic in Los Angeles.

“They offered me a job to stay,” he recalled in 2015. “I came home to tell my parents. I flew into Pittsburgh and saw all the rolling hills, without any of the big skyscrapers or the photochemical haze over everything. … That’s where I knew I belonged.”

Bradley, who also volunteers as the team physician for Fox Chapel Area High School near Pittsburgh, chairs the NFL’s Medical Research Peer Review Committee and serves on the league’s Injury and Safety Committee. Several publications have named him one of America’s best sports surgeons.

In a recent interview with the Inquirer, Bradley said stem cell injections “are not magic,” but appear to help the healing process by promoting the blood vessel growth, suppressing inflammation, and recruiting even more stem cells. The injected cells “ring the dinner bell for your own stem cells to come in and help with healing,” he said.

By Frank Fitzpatrick for The Philadelphia Inquirer
December 27, 2017
Source