NEW YORK — The NFL announced that concussions this season were reduced by 13 percent from last season and concussions caused by helmet-to-helmet hits had decreased by 23 percent.

Members of the NFL community discussed developments in the 2013 season, injury data and research advances at an annual news conference.

Dr. John York, chairman of the owners’ health and safety committee, covered the progress made both on and off the field. The San Francisco 49ers co-chairman touched on the eight National Institutes of Health-funded grants totaling $16 million that help answer some of the most fundamental problems on traumatic brain injury.

Jeff Miller, NFL senior vice president of health and safety policy, said there are uniform protocols on the sideline for diagnosing concussions. “We feel confident in the data,” Miller said. “There will be inevitable statistical abnormalities year over year.”

Miller presented injury data, which showed 228 diagnosed concussions during the 2013 preseason and regular-season practices and games combined, down from 261 in 2012 (a 13 percent decrease.) Miller said there was a 23 percent decrease over the past two seasons in the number of concussions caused by helmet-to-helmet contact. ACL injuries also were down; the NFL says there were 57 in the 2013 preseason and regular-season practices and games, compared to 63 last year. MCL injuries were relatively flat; there were 133 this year and 132 last year.

“There has been no significant increase or decrease in MCL injuries over the last three years,” Miller said. “Overall, we have not seen any increase in the ACL injuries.”

Regarding the concussions figures, Miller said: “We’ll continue to look at this data as this injury continues being of great importance.”

Dr. Mitchell Berger, subcommittee chair on former players and long-term effects of brain and spine injury of the NFL Head, Neck & Spine Committee, described the advances his group has made regarding head injuries.

“We were always welcomed by the team physicians and the medical staffs of all the teams,” Berger said. “We’re not there to replace the team physicians; they’re very good at what they do. Because it’s such a fast-paced game, to have an extra set of eyes can only help.”

Berger explained a term called connectivity, which explores the possibility of a concussion occurring when certain areas of the brain aren’t communicating together.

Dr. Matthew Matava is the St. Louis Rams‘ team physician and president of the NFL Physicians Society. His role is to oversee the activities of all NFL team physicians, and he said technological tools and advances, such as video capabilities, are being used to further evaluate player injuries. He ran through a baseline assessment demo that includes a list of symptoms and gives a composite score that helps measure the severity of the injury, including possible concussions.

“This has been a very helpful tool in our assessment and management of concussions,” Matava said. “Our goal, first and foremost, is the health and safety of the players.” Matava added that there’s been no pressure within the Rams organization for an injured player to return to the field during his tenure there.

“We have always argued … that the team physicians should be the ones to make the final call on whether there’s a concussion,” he said.

Berger said it’s encouraging that the number of concussions is going down. “We try to be very, very proactive in terms of letting them (players) know about the signs and symptoms.”

The NFL showed a graphic that indicated the amount of injuries on NFL Network’s “Thursday Night Football” games compared to Sunday and Monday games are similar.
source: http://www.nfl.com/news/story/0ap2000000320373/article/nfl-says-concussions-acl-injuries-decreased-this-season 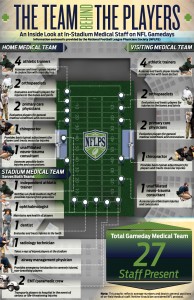