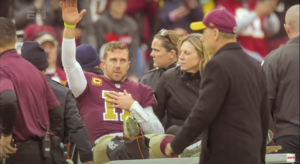 Washington Redskins quarterback Alex Smith has attacked the past 17 months with a singular focus: return to the football field.

Smith has been sidelined since Nov. 18, 2018, when he suffered a spiral compound fracture to his tibia and fibula in his right leg. He’s since undergone 17 surgeries and countless hours of rehab — all to achieve his ultimate goal of playing again.

“I still have dreams of getting back to where I was and getting back out there,” Smith told reporters during the Redskins’ locker room cleanout after the 2019 season. “This has been, obviously, a crazy ride with a lot of unforeseen turns, but without a doubt that’s still my goal.”

ESPN has been chronicling Smith’s harrowing journey, and on Friday night, the network aired a special edition of E:60 titled “Project 11.”

The hour-long documentary sheds light on “Smith’s riveting story from lightly recruited high school quarterback to battle-tested former No. 1 draft pick fighting his way back from an injury that almost cost him everything.”